Skip to content
Martin Simonneau from Cool Earth (right) spoke at the Human After All event, on the topic: ‘Is direct giving the future of aid?’

Cool Earth’s Martin Simonneau spoke at ‘Is direct giving the future of aid?”, an event hosted by design agency Human After All.

Speaking alongside Guillermo Rodriguez-Guzman from the Centre for Homelessness and Rachel Waddell from Give Directly. Martin highlighted our latest project to provide unconditional cash to Asháninka villages in the Peruvian Amazon, longstanding Cool Earth partners.

Unconditional cash payments aim to address the marginalisation of people living in rainforest and kick back against outdated conservation models. This is an alternative approach to rainforest protection. 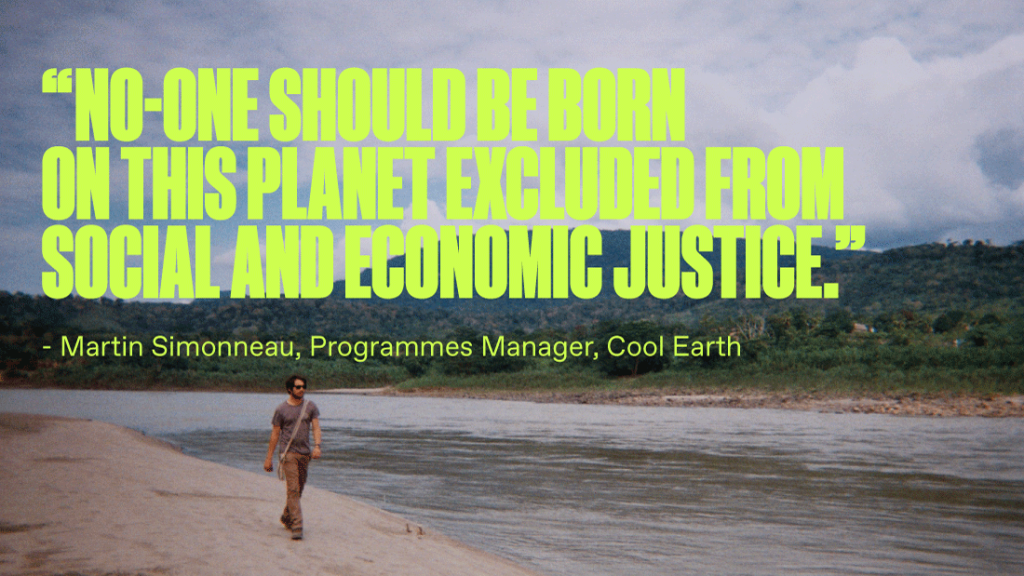 Let’s take a step back.

Rainforests are essential carbon sinks. Protecting them is a critical part of fighting the climate crisis, as is protecting terrestrial biodiversity and supporting the livelihoods of 805 million people around the world. Whilst Indigenous peoples and local communities make up less than 5% of the world’s population, they manage or have rights to at least 25% of the planet’s land surface and protect an estimated 80% of global biodiversity.

We get cash to the climate crisis frontlines.

The rationale behind providing unconditional cash payments is backed up by 12 years of our unique relationships with people living in rainforest and sector research. More recently, sector research*, shows that lands managed by Indigenous communities have lower rates of deforestation compared to neighbouring territories and other rainforest management approaches.

“It’s people working on the front lines of deforestation and ecosystem degradation that will be coming up with the solutions. And we need to support as many of those people as we can.” Martin Simonneau, Programmes Manager, Cool Earth

Successful forest preservation means empowering rights holders who face difficult socio-economic, political and cultural challenges. Their resilience is the most effective way of reducing the vulnerability of the ecosystems in which they live.

We will be presenting cash transfers model at the FLARE conference on Forests and Livelihoods in Rome and at the Basic Income Earth Network (BIEN) Congress in Australia later this year – we’ll keep you posted on this, and on the progress of our project (that you make possible) in the coming months, right here.

👉  Read Martin’s interview with Human After All over on their website.